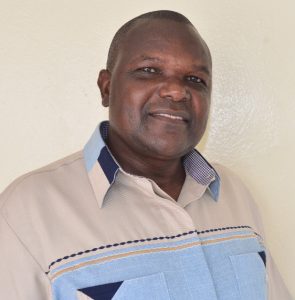 Mr. Were heads the Transition Team deployed to operationalize Bandari Maritime Academy as the Acting Director/Chief Executive Officer. He was deployed from the State Department for Shipping and Maritime in the Ministry of Transport, Infrastructure, Housing, Urban Development and Public Works where he was serving as a Deputy Director Administration. He holds a Bachelor of Arts degree (Political Science and Kiswahili) from the University of Nairobi and a masters degree in Business Administration (Strategic Management Option) from Kenyatta University.

Mr. Were has served in the Kenya Public Service for a period totaling twenty nine (29) years. As a career civil servant, he was extensively trained. Among the in-service training he went through was the Advanced Public Administration Course where he scored a distinction, Senior Management Course, and the apex training in the Kenya Public Service, Strategic Leadership Development Programme. He also attended the Introduction to Maritime Security and Blue Economy training at the Peace and Conflict Studies School, Embakasi.

Before deployment to BMA, Mr. Were served as Deputy Director Administration at the State Departments for Shipping and Maritime and Culture and Heritage. Prior to this, he had served as County Secretary and also Chief Officer for a combined period of five (5) years. His background was largely in the field of administration where he rose through the ranks from District Officer to Deputy Provincial Commissioner. He sits on Board of Management of several schools.